What does “home” mean when you’re a TCK? Ask me where I’ve been, not where I’m from

By Natalie Hahn
Posted February 17, 2019
In Friendship and love, On our Journey, Relationships
1
0

This article was first published in Elephant Journal on February 16, 2019.

“So, where are you from originally?”

And there is a silence that’s a smidge too long for such an innocent question. I want to give him an honest answer, and it seems like I should be able to give an easy answer, but for someone like me those two things are mutually exclusive.

I quickly reach for the sake to give myself another few seconds, take a searing hot gulp, unsuccessfully faking casual. We are picking at a sushi boat between us, and were laughing a moment ago about the day’s events. But now we have an awkward ford of silence.

My freshman year of college, I joined the Mexican-American Student Club.  If you look at my Ancestry.com chart, you will find that I am not Mexican. Not even a little bit. In fact, according to that chart, no sliver of me or my ancestors were bred anywhere in Latin America. But I spent my freshmen year with other 18-year-olds from Mexico, a few Central American locations like Guatemala and Honduras, and other parts of California.

I was told that my English was very good.

Are my TCKs in the house? Raise your hands!

A Third Culture Kid (TCK) is a child who spends his formative years in a culture that belongs to neither of his parents. In my case, my parents are also TCKs. Being a TCK is different than being bi-racial or multi-racial. It’s different than being an ex-pat. I am actually both a TCK and biracial – which is not uncommon among TCKs.

A TCK comes in many flavors: government brats, military brats, missionary kids, international business kids and immigrants. I wonder why only those of us from the government and military were called brats…

Why is it hard for a TCK to answer “where are you from”?

I was born in California.

I spent my formative years (ages 9 through 18) in four different countries on three different continents.

When I went back to California for college, I could not answer that question with “I’m from California.” Most of the students in my school were from California. So, inevitably, the questioner would roll her eyes and say, “Yes, but where is your home – where did you go to high school?”

We are kneeling in the pews. My youngest son is eight. His hockey teammate is getting confirmed. He begged me to go to the confirmation because he didn’t want to attend alone, and he is anxious because I am clueless when it comes to Catholic traditions.  He, on the other hand, has been in Catholic school since preschool and is quite comfortable with the rigors of the ceremony. He has already reminded me twice to just follow his lead for when to sit, kneel, stand, and what to say. 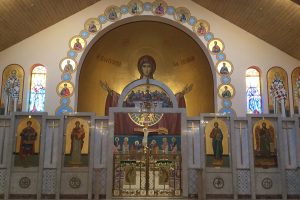 My eyes wander around the church. The stained glass is gleams gorgeously in the sunlight. The high, cool arches offer a sense of grandness that is both awesome and soothing. I am taken back to the last time I was in such a graceful and ornate cathedral.  I was 12 and it was Easter. My neighbors took me down to the village and we joined a procession that walked through the entire town, singing, winding our way to the village church. We made the sign of the cross as we entered. It was beautiful. There was so much tradition and respect and joy in the entire experience.

“You’re doing it wrong!” he hisses.

Startled, I glance down at my son. “What?” I whisper, a little disoriented to be whipped out of my happy reveries.

“The sign of the cross. You’re doing it wrong!” He rolls his eyes. “I knew you were going to embarrass me, Mom.  How do you mess THAT up?”

So, it turns out that in the Greek orthodox tradition, the sign of the cross is made in the opposite direction from the American Catholic tradition.

I am looking at my clan of young men; young men I have known since they were boys, and we are about to tackle our longest Spartan race yet. We have done these races every year for the past six years. This race clinches our trifecta and we are anxious but determined. 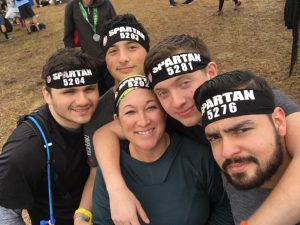 It’s unusually cold and rainy in Central Florida, we have not trained properly, and a 14.1 mile course with 29 obstacles looms ahead.  We are shivering. Some of it is from the cold.

“No tengo miedo, mami. Yo soy el medico,” he waves his camelback at me, stuffed with snacks and bandaids. “¡No dejamos a ningún hombre atrás!”

My own sons have no idea what he said. He translates.

Third Culture Kids really do have a third culture.  And it’s not wholly their adopted country’s culture. It’s one they create: a mix of the country culture they are living in, with the ethnic culture they were born to and the home culture their parents have created. Our culture comes out of a blender.

Our blender culture shows. We are comfortable in any environment, easily adapting to the flow of energy and personalities around us. We see all the shades of gray. We are generally fearless about languages, food and new locales. We will try any new hobby, visit any interesting landmark, talk to anyone’s baby sister or great-grandfather.  Because we know adventures and stories are everywhere.

On the other hand, it can be difficult to feel at home anywhere. We can be rootless, anchorless. We feel misunderstood, and can be hard for us to make close friends. Those who were raised in a singular place and culture their whole lives often don’t quite understand us. We are accused of being snobbish or condescending when we talk about our childhood.  Sometimes that’s true. Sometimes, we are just relating what we know.

We feel we have to apologize for having these different experiences.

When you don’t fit in anywhere but you can live everywhere, where exactly does that leave you?  The thing is, we envy our friends who all went to the same middle school and high school together, who lived in the same town most of their lives. We envy those roots and bonds. And yet, we wouldn’t change a thing about how we grew up, either.

Where are you from?  Where do you call home?

I am sitting in a sidewalk café in Sonoma. I am looking at the hills, at the town square. I breathe in the fresh air and energy that is unique to the wine country of Northern California. And I start to cry. Why did I ever leave this place?

The white sun has generated a sheen of sweat across my skin. I take off my headphones and head down to the water to cool off. As I float in the gulf waves, I watch pelicans soar overhead, casting pterodactyl shadows on the water. I could stay here forever.

I am sitting in a bar in Boston, reconnecting with friends I haven’t seen in years. We are on a new venture together now. I am laughing, reminded of why I had enjoyed being with this group before. And I am immensely grateful that I am coming home to them.

I am on a street corner in Yokohama, introducing my kids to the glories of Japanese vending machines. Hot ramen? No problem. Pocari Sweat? By all means. Fanta Red Cream Soda?  Indulge! In the bustle of shoppers, my red-haired, blue-eyed daughter turns to me, “Is it weird that this feels like home? I feel like we’re at Grandma’s house.” I smile because I know I am home. I love that she feels it, too.

We are not Japanese. But we all grew up there. My parents, my brother, and myself.

Home for a TCK is not so much about place. We do love places. So many places, in fact. But just like we can’t neatly answer the question of where we are from, our definition of “home” is also blended. Home is not a single place, a culture, or even our blood relatives.

A TCK seeks “home” where our odd taste in food, funny choice of films, tragically bohemian-not-really-chic décor, and sometimes awkward use of the English language is enjoyed. Where itchy feet and a craving for adventure is encouraged. Where we can celebrate the Year of the Pig, Simon de Bolivar’s birthday, and dye our Easter eggs red on Holy Thursday, and no one argues about cultural misappropriation.

Home is where ever we can bring our blended selves and feel fully accepted.