What drives your spirit of competition? 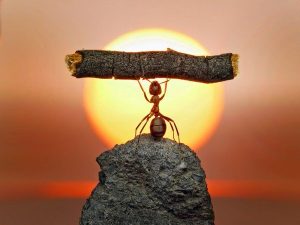 Put me in a situation where there’s another team to beat, a medal to be won or a bit of bragging rights to own, and I am all in. I will strategize, plot, scheme and yes, train, sweat and give it my all. I’ll trash talk. I’ll gloat. I’ll poke and prod hoping to rattle the opposition. And I might win or I might not, but I’m going to go after it. Hard. And then I’ll have a drink to toast the winner (hopefully me!) of a hard fought battle.  I love a good competition.

But there’s another way to compete. The one where people get tense, grow angry.  Winning, or being proven right, whatever the competitive outcome, becomes more important than the experience of the competition itself. And the joyful gloating at the end results in hurt feelings, testy words and an overall sense of dissatisfaction. For everyone. This is the kind of competition where resentment simmers and relationships crumble.

Our society has built systems around non-competitiveness.  My kids have trophies for “participation” in soccer.  My youngest got an “academic achievement award“ in the 8th grade for “attendance.” (Seriously…) We have taught children that losing is bad, feeling badly is bad, and therefore we must do all we can to avoid it.

I am not a fan of feeling badly but let’s be honest: we just don’t get through life without feeling some it sometimes. And learning from it.

I am, however, a fan of competition. And reconciling the two is all about how we look at competition.  It’s about inspiration versus threat. 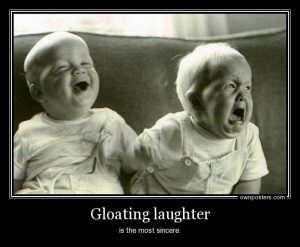 If we’re competing to beat our brother at tennis because he needs to be taken down a notch, to prove our mother is wrong and we are right, to show our ex how much he lost when he became “the ex”… well, then we’re competing for our sense of self-value. We’re competing to prove that we have worth. The competition becomes a messy, bloody battle because our sense of self-worth felt threatened, and we get all wrapped up in proving that we are better than another person. Under these conditions, talking smack, regardless of how it’s intended, is interpreted as a personal attack. Then we get defensive and we lash out. We feel we have no room to be wrong, because everyone’s watching us, waiting for us to fail. It’s no wonder that whatever bet we made ends in lasting resentment. We can’t afford to be wrong. We believe can’t lose or we lose face.  The nature of this competition is insecurity and self-defense.

That’s the route when we compete when we feel threatened. But what happens when competition is based on inspiration?

The definition of competition is pitting oneself against another, or one team against another. There will be a winner and there will be a loser, but winning isn’t a personal vendetta. It’s about showcasing your talent, your strength, your smarts. You’re competing for an outcome that gets you to a better place, to a better you. And losing doesn’t mean that you, as a person, are somehow LESS.  It just means you lost – someone else worked harder, got luckier, or was perhaps a little smarter. But you are still the wholly talented, strong, smart you that you were when the competition began. So yes, you want to run faster than the woman in the tutu and reindeer antlers who shows up at every

Christmas run. You want to crush your cousin in Monopoly because the war over Boardwalk has been going on for two decades and really ought to be settled. Yes, you make a bet with your brother about the year that movie came out because you’re right, damn it. And you’re going to trash talk him about it because you want to see what he’s got – and because you know you’re right.  But this competition is fueled from the spirit of of fun, of inspiration. It’s about winning. Not about defending your self-esteem.

When proving your self-worth is not at the root of the competition, then you win. And lose. And become an outstanding sportsman.  Those Olympic athletes who went to Rio this summer were out there to win.  They dedicated hours of their lives, pounds of sweat and plenty of money to achieving a place on the Olympic team, and every one of them wanted to perform well and medal.  They were there to show to the world what they could do.  And what allowed them to be friends, to be genuine supporters, of their closest competitors in their sport, is their understanding that their win is about being a bigger, better version of themselves, not about making their competitors smaller, lesser athletes.

The next time you compete, ask yourself what you’re competing for. Is it for your ego, or is it for your soul?

I will continue to wear my FitBit and compete in those daily and weekly step wars. Yes, I am that irritating person who runs extra circles around her driveway to get in those 100 steps to win. But I know in the weeks that Cindy or Valerie steps all over me, they worked harder than I did for that. And I have another week to get back on top of my game!

Natalie Hahn is a principal at Dirty Girls Consulting, focused on helping men and women tackle the challenges of communication and life transitions. We explore breaking free of traditional standards, how we communicate between the sexes and redefine the “midlife crisis” to accomplish professional and personal goals, creating an authentic, fully loved life. Read more Dirty Girl Consulting blogs here.