A day of infamy: what will you do when it’s yours?

By Natalie Hahn
Posted December 4, 2016
In Inner strength, Intuition and trust, On our Journey, Soul searching
0
0

December 7, 1941. She was enjoying breakfast with her mother in the courtyard of the Moana Surfrider hotel on 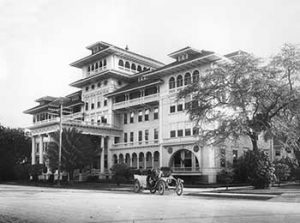 Oahu. Over coffee and fruit – and a vain attempt to convince her mother to try the local specialty, poi – they were finalizing the details of for the next week’s big event. Her wedding. Planned for December 14, 1941, her mother had flown to Hawaii a two weeks earlier to help plan her only daughter’s celebration of a new phase in her life. The governor of Hawaii offered his mansion for the occasion and over the past two weeks, all the nitty details – flowers, catering, music – had been nailed down. These final seven days were dedicated to relaxing, last minute changes to the guest list, and enjoying the beauty that was Hawaii in December.

The groom worked for the Army Corps of Engineers. The bride was a secretary for the same outfit. The two had met back in Los Angeles, where they had started their careers in the government service, but did not start dating seriously until both had been posted to Hawaii. To work at Pearl Harbor Naval Station.

Her mother was cautiously eyeing the poi. From across the table, the bride was smiling encouragingly. Her mother flew in from St. Louis, and although was herself an unusually modern woman for her time, and especially for conservative, midwestern St. Louis (after all, she gave her daughter the spirit to take off to LA as a young woman and find her own path and career, unusual for a woman in the 1930s and 1940s), she was not sure this pasty pudding was really the type of adventure she needed a week before seeing her daughter off on her own new adventure. So she eyed the traditional Hawaiian fare with suspicion.

And that’s when the sky filled with the unmistakable buzzing of aircraft. Aircraft flying loud and low. And the earth began to shake as explosions rocked both land and sea.  The wedding was off.

President Roosevelt called the bombing of Pearl Harbor “a day that will live in infamy.” That day of infamy changed everything.

That day changed the lives of not just my grandmother and grandfather, and thousands of others in Pearl Harbor that day, but changed the path of the world, as well.

That day, the United States was forcibly dragged into a World War they had not yet committed to fighting.

That day, the United States started its journey from a #14 world power to becoming the #1 superpower in the world.

That day, a cultural revolution was forced upon us – not just the US, but the world. Men, in record numbers, went off to war – went off to fulfill their sense of duty, of obligation, of honor. And women were at home, filling in the void. For the first time in history, women were the power sustaining the world economy, working in factories and offices around the world. And this changed the dynamic between men and women forever. 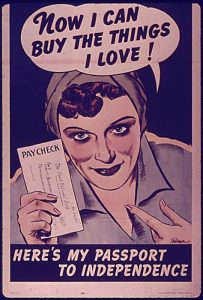 En masse, women got a taste of the working life the men in their lives had always enjoyed: leaving the house behind every day, working in a job that was contributing to society, that was producing meaningful results, bringing home a paycheck that was earned, that was theirs. While certainly prior to the US entering WWII, more and more women were entering the workforce, the pace was unnaturally accelerated when we went to war. And it formed a new dynamic at home for women. Now that they were working ,the double duty of parenting and housekeeping forced changes in relationships with extended family, with educational institutions, with the government. Different services and different benefits were now needed. And women were looking at their society, their needs and themselves differently.

What a confusing mess of dynamics when men came home at the end of the war. They survived the horrors of battle and were told to forget about it and go home to move on with their lives. They were encouraged to bury their memories and their feelings of the past few years and focus on building their futures. But what futures were they building? At home, their lives had changed without them. Their wives had jobs, incomes and a different sense of independence and self-value. Their children were strangers. Their families tip-toed around them, not sure how to talk to them or what to talk about.

Go with it. Question everything. It’s time. That’s what your day of infamy is for: it’s your opportunity to look around and choose your future. Choose it consciously. Choose who you are, choose who you surround yourself with, choose where you spend your energy and how you build your life. Your day of infamy may take you to rock bottom, but you choose how long you stay there and how you show up as you pull yourself out.

On that day of infamy in 1941, President Roosevelt made a choice. He chose to enter WWII and change the future of the US and the world forever.

On that day of infamy in 1941, my grandparents carefully planned Hawaiian wedding was abruptly canceled. Their futures were irrevocably changed. They survived the bombings, made new plans to get married at their next assignment (Alaska) and at the end of the war, joined the US forces’ occupation of Okinawa.  Which is where they stayed for the next 20+ years. An opportunity that was not available to them pre-December 7, 1941.

You day of infamy may still be ahead of you. It may be years, months or days behind you. Whenever it is, remember the opportunities it brings. It’s yours.  Do with it what you will.